One year ago, first-time PRP primality testing with proofs was introduced. It has been a huge success, saving GIMPS tens of thousands future double-checks. Going forward, the server will no longer make available exponents for first time Lucas-Lehmer tests. Users that have not yet upgraded to prime95 version 30.3 or gpuowl for GPUs should do so. Failure to upgrade will result in necessary double-check work. GIMPS has a multi-year backlog of double-checks to work through. There is even a chance that a new Mersenne prime is hidden in all those double-checks.

The server will continue to accept Lucas-Lehmer results. There is no need to worry about any LL tests that are currently underway.

A breakthrough by Krzysztof Pietrzak makes it possible to eliminate the second primality test! The first primality test produces a proof file that can be securely verified with less than 0.5% of the work required to re-run the primality test. This breakthrough will nearly double GIMPS' throughput in the long run.

Version 30.3 is now available with PRP proofs. While not a required upgrade, at some point in the future only users running version 30.3 with PRP proofs will be assigned first-time primality tests. Should you run into any problems, support is available at this thread at Mersenne Forum.

Many thanks to Mihai Preda for discovering the paper on the breakthrough and realizing its importance to the GIMPS project. Also, thanks go to Pavel Atnashev for important ideas on adapting the discovery for use by GIMPS. 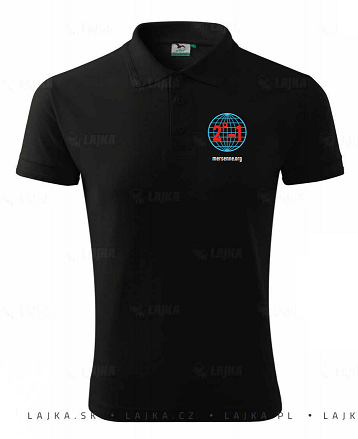 Show your love of math and prime numbers with a GIMPS shirt! Friends and family will surely be impressed. Viliam Furik has taken the initiative to create, manufacture, and sell GIMPS polo and T-shirts. Viliam will not profit from the sale of the shirts. Any "loose change" from price rounding will be donated to GIMPS. Shirts are sold for the price of the shirt itself and embroidering. Custom text can be added upon request.

Price is expected to be about $9 for a T-shirt and $13 for a polo, plus shipping. Shipping ranges from $6.50 to $10 to Europe, USA, Argentina, Brasil, Canada, China, Egypt, Hong Kong, India, Israel, Japan, S. Korea, Mexico, Russia, Thailand, Turkey, and U.S. territories.

The pre-order/interest form is here.

The latest information on expected order date (we get a cheaper price if we order a batch of 50 or more), shirt sizing, etc. can be found here at MersenneForum. You can also ask questions of Viliam on the forum.

SRBase has created a BOINC project to hand out trial factoring assignments on large Mersenne numbers. These are very quick work units. To get the most of the BOINC client without any issues, a FAQ at the SRBASE forum is available.

Note that there’s no way to individually credit SRBase users in GIMPS trial factoring stats. All work is credited to GIMPS user SRBase.

GIMPS needs your help! For the first time in our 23 year history we are conducting a fundraiser. Our goal is to raise $5000 or more in 2019 to build a better cushion for upcoming ISP expenses and cover the next prime discovery award. Please consider making a donation so GIMPS can continue its quest to discover ever larger Mersenne primes for years to come.

GIMPS has set up a new subforum where the board of directors will keep our users well informed of its decisions, past and present finances, and fundraising progress.

UPDATE: The 2019 fundraiser has been a huge success, easily exceeding our goal! Many thanks to all those that contributed. GIMPS now has a cushion to guard against unexpected occurrences such as multiple prime discoveries or a server hardware failure. Our ISP expenses of about $2000 per year continue.

Version 29.8 (build 6) is the latest version available for download.

Highlights of version 29.8 include

You can view the full list of changes in the version history file here.

December 21, 2018 — The Great Internet Mersenne Prime Search (GIMPS) has discovered the largest known prime number, 282,589,933-1, having 24,862,048 digits. A computer volunteered by Patrick Laroche from Ocala, Florida made the find on December 7, 2018. The new prime number, also known as M82589933, is calculated by multiplying together 82,589,933 twos and then subtracting one. It is more than one and a half million digits larger than the previous record prime number.

GIMPS has been on amazing lucky streak finding triple the expected number of new Mersenne primes -- a dozen in the last fifteen years. This prime was even luckier for Patrick Laroche, striking pay dirt on just his fourth try. For years, Patrick had used GIMPS software as a free "stress test" for his computer builds. Less than four months ago he started prime hunting on his media server to give back to the project. By way of comparison, some GIMPS participants have searched for more than 20 years with tens of thousands of attempts but no success. This proves that, with luck, anyone can find the next new Mersenne prime.

The new prime is only the 51st known Mersenne prime ever discovered. Mersenne primes were named for the French monk Marin Mersenne, who studied these numbers more than 350 years ago. GIMPS, founded in 1996, has discovered the last 17 Mersenne primes. Volunteers download a free program to search for these primes, with a cash award offered to anyone lucky enough to find a new prime. Prof. Chris Caldwell maintains an authoritative web site on the largest known primes, and has an excellent history of Mersenne primes.

Patrick is one of thousands of volunteers using free GIMPS software available at www.mersenne.org/download/. Credit for this prime goes not only to Patrick Laroche for running the Prime95 software, Woltman for writing the software, Blosser for keeping the Primenet server running smoothly, and the thousands of GIMPS volunteers that sifted through millions of non-prime candidates.  In recognition of all the above people, official credit for this discovery goes to "P. Laroche, G. Woltman, A. Blosser, et al."

You can read a little more in the press release.

All tests smaller than M(43112609) have been verified, officially making it the 47th Mersenne Prime

This highlights the importance of waiting until all smaller exponents have been tested and verified before we can say definitively where any Mersenne prime is ranked. Due to the distributed nature of the project as a whole, numbers are not always tested in order and a smaller Mersenne prime may yet be found. For that reason, thanks to all the GIMPS members that contributed their resources towards achieving this milestone. Join now to help GIMPS press onward with verification tests to prove M(57885161) is the 48th Mersenne prime!

All tests smaller than M(42643801) have been verified, officially making it the 46th Mersenne Prime

February 22, 2018 — Nearly 9 years ago in June 2009, M(42643801) was discovered, and now GIMPS has finished verification testing on every smaller Mersenne number. With no smaller primes found, M(42643801) is officially the 46th Mersenne prime. Thanks to all the GIMPS members that contributed their resources towards achieving this milestone. Join now to help GIMPS press onward with verification tests to prove M(43112609) is the 47th Mersenne prime.

Verification tests are an important part of the GIMPS project. Errors can occur during a test of smaller numbers, invalidating the end result. Only by doing a double-check with matching results are we able to say for sure that a Mersenne number is composite. Until all numbers below a Mersenne prime have been verified, we don't know for sure if it's the 46th known Mersenne prime or if there might be a smaller one that we missed due to a machine error, so we at GIMPS celebrate these important verification milestones.

Jonathan Pace is a 51 year old Electrical Engineer living in Germantown Tennessee. He is a long-time math enthusiast now working at FedEx and active in community charities. As SysAdmin for his charities, he runs Prime95 on all PCs and servers because GIMPS emails him if one doesn't check in, which is helpful for monitoring these remote computers from home or work. The PC that found the new prime took six days of intense computation on a quad-core Intel i5-6600 CPU to prove the number prime.

To be thorough, the prime number was independently verified with four different programs running on various hardware configurations.

Could you be the next lucky volunteer to discover a brand new Mersenne Prime? You'll need a reasonably modern PC and the free software on the download page.

You can read a little more in the press release.

January 7, 2016 — GIMPS celebrated its 20th anniversary with the discovery of the largest known prime number, 274,207,281-1. Curtis Cooper, one of many thousands of GIMPS volunteers, used one of his university's computers to make the find. The prime number, also known as M74207281, is calculated by multiplying together 74,207,281 twos then subtracting one. It has 22,338,618 digits -- almost 5 million digits longer than the previous record prime number.

Dr. Cooper is a professor at the University of Central Missouri. This is the fourth record prime for Dr. Cooper and his university. The primality proof took a month of computing on a PC with an Intel I7-4790 CPU.  Dr. Cooper and the University of Central Missouri is the largest contributor of CPU time to the GIMPS project. The discovery is eligible for a $3,000 GIMPS research discovery award.

You can learn more in the press release or watch the standupmaths interview with Curtis Cooper regarding his discovery:

February 2014 — Since 2008, GIMPS has given users one year to complete assignments. This rule has not been enforced. This has held up completing milestones as some assignments did not complete even after several years.

During February 2014, new assignment and recycling policies were put in place to help GIMPS make steady progress on milestones by detecting assignments that are proceeding extremely slowly or not at all.

This affects users in two ways:

Users testing 100 million digit numbers are not affected by these new rules. Assignments made prior to March 1, 2014 will be given a year, as promised, to complete (plus a grace period if the assignment is close to complete).

GIMPS forums — Here you can chat with fellow GIMPS members, get help with installation questions, learn more about how GIMPS works, etc.

You could discover one of the most coveted finds in all of Mathematics - a new Mersenne prime number. We've found fifteen already. Join in on this fun, yet serious research project. All you need is a personal computer, patience, and a lot of luck.

In addition to the joy of making a mathematical discovery, you could win a (USD) $3,000 cash GIMPS Research Discovery Award for each Mersenne prime discovered, and the Electronic Frontier Foundation is offering a $150,000 award to the first person or group to discover a 100 million digit prime number! See how GIMPS will distribute this award if we are lucky enough to find the winning 100 million digit prime.

What are Mersenne primes and why do we search for them?

Prime numbers have long fascinated amateur and professional mathematicians. An integer greater than one is called a prime number if its only divisors are one and itself. The first prime numbers are 2, 3, 5, 7, 11, etc. For example, the number 10 is not prime because it is divisible by 2 and 5. A Mersenne prime is a prime of the form 2P-1. The first Mersenne primes are 3, 7, 31, 127 (corresponding to P = 2, 3, 5, 7). There are only 51 known Mersenne primes.

GIMPS, the Great Internet Mersenne Prime Search, was formed in January 1996 to discover new world-record-size Mersenne primes. GIMPS harnesses the power of thousands of small computers like yours to search for these "needles in a haystack".

Most GIMPS members join the search for the thrill of possibly discovering a record-setting, rare, and historic new Mersenne prime. Of course, there are many other reasons.